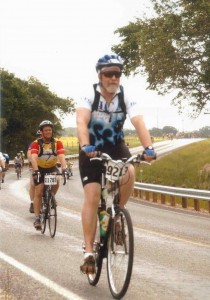 "Instead of putting the pedal to the metal in his Lincoln Navigator on the way to work, real estate broker Roger Martin is pedaling his bike to Roger Martin Properties to improve his health and promote better stamina in his daily routine.

"While attending The University of Texas in Austin, Martin used to bicycle all around the campus and the city.

"Through the years he continued to ride bicycles during varoius intervals in his life and participated in two MS 150 bike rides from Houston to Austin.

"His incentive to get into better shape was inspired by his son who started taking tennis lesson at the City Club in Greenway Plaza, which resulted in Martin beginning a workout regimen in the club's gym. Aware of the campaign 'Ride Your Bike to Work' spurred Martin into dusting off his bicycle a couple of months ago.

"'I had one client a couple of years ago who wanted to ride a bicycle to preview houses and we rode our bikes through West University looking at different homes on the market. I found out that besides the health benefit you can see a neighborhood a lot better while riding a bike,' said Martin, who established Roger Martin Properties in West University in 1989.

"'Recently, I started riding my bike to the City Club and the West University Rotary meetings,' he said.

"'Now I'm planning to make my office bicycle friendly by installing bike racks in an area to park in front of the sidewalk and I am going to install an air pump so people can inflate their tires.'"

By Jude Patronella, the Houston Chronicle

I did indeed install the bike rack outside my office, where it sees frequent use by visitors to the Edloe Deli.  And of course, it is still there whenever I ride to work!