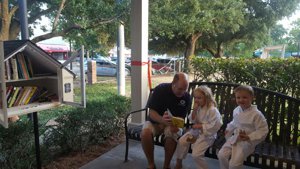 Less than a year after establishing a Little Free Library in West University's Colonial Park, local author Chris Cander launched another book exchange at the Scout House, in the 6100 block of Edloe across from Roger Martin Properties. Cander is a West U resident and award-winning children’s book author. She says there are thousands of Little Free Libraries worldwide, but this is the first city-wide project.

In partnership with the City’s Parks and Recreation Department, Cander introduced the first Little Free Library in the West University Park system. That library, designed to look like West U Elementary School, was dedicated in October of 2015. Bright Sky Press contributed the foundation inventory and Roger Martin Properties underwrote the project.  There are plans for six libraries in all, in each of the city parks. Each of the libraries is designed to resemble a West U landmark. The newest library looks like the West University Scout House. In this photo, West U Parks Chair Kevin Boyle reads to Mayor Susan Sample's four-year old twins.  She reports that the twins, Caroline and Thomas Larsson, love the library and were very excited to be part of the ribbon cutting ceremony.

Each library's inventory is self sustaining, encouraging people to "take a book, return a book.”  There are selections for children, young adults and mature adults.

Little Free Library founder Todd H. Bol describes their mission as "promoting literacy and the love of reading by building free book exchanges worldwide and building a sense of community as a way to share skills, creativity and wisdom across generations." There are nearly 40,000 Little Free Library book exchanges around the world, encouraging curbside literacy home and sharing millions of books annually.